Living life symbolically is a wonderfully rewarding experience and it reached a peak yesterday when I meet the very sign that brought me on this journey – World Dance Calf Nataraja! It took until the end of a very long, hot day but when it did happen it was an amazing experience that lead to spontaneous singing and dancing by the locals!  (see Nataraja)

Before I left Canada I had a dream about a a scarf and a few days later I walked into a store and there it was! I just bought it without even really looking at it. I knew I needed to bring it to Rwanda but I wasn’t sure why and it didn’t make sense until I got to California and I realized that it had an image of Nataraja on it and it was meant as an offering for him. 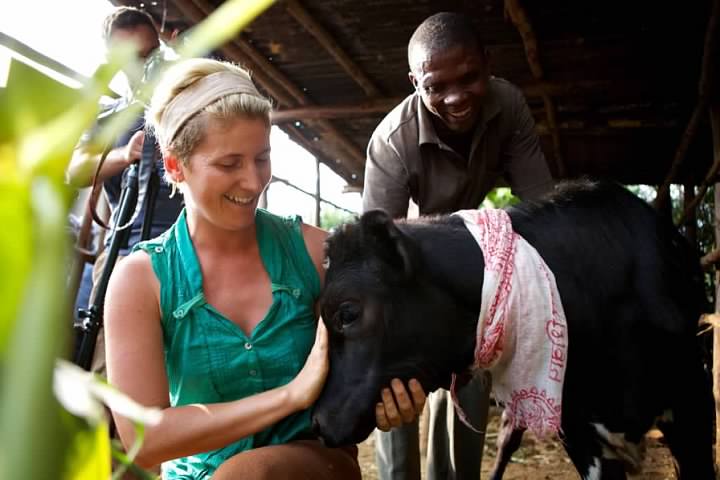 So when I walked up to him and presented him with scarf by wrapping it around his neck, the locals went crazy with laughter and clapping! Justin B. explained the story I had just told to the camera man about the significance of the scarf and they were even more elated. As we walked away the group of men and the pastor spontaneously burst into song and dance! It was one of the most amazing experiences I have been a part of!  I immediately joined in and celebrated in joy with them. I am honored to be here and to be sharing in these magical moments with these beautiful people. I am again learning so much about what dance really means to me and how powerful a tool it can be. 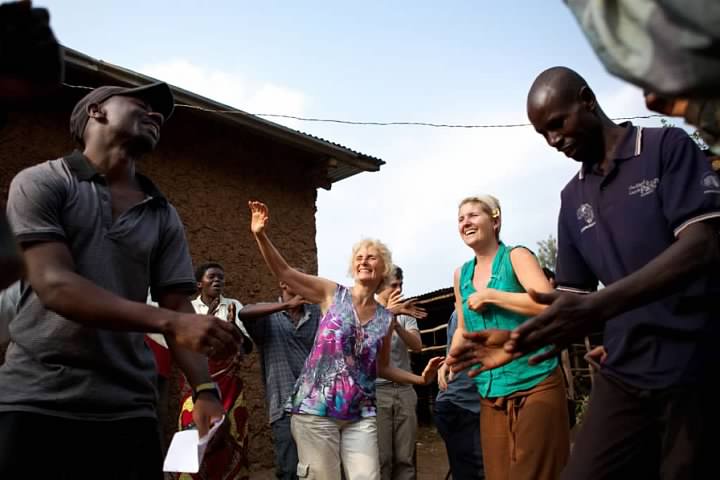 Earlier we had joined the Never Again community in the fields, walking a few kilometers through the open hills to find a colorful patches of people working joyfully together. The image of water being thrown through the air in large fan like shapes to the buzz of community engaging together in the work is something that I will never forget. I was handed a watering can and began to sing the “numbers song” that our group now has replaying in our heads! The large group of people that had gathered around me all began to laugh and join in! They love to just watch what the Muzungu (white man who wanders around aimlessly) is doing. I balanced the watering can on my head and they laughed even more. Soon it was time to move onto the next field and I said my goodbye (Murabeho) and thank-you’s to the group (Murakoze).

The next group is where I met my very confident French, English and Kinyarwanda speaking friend Julliet and gave her my card as promised. I am not so sure what she will do with it but I am happy to follow through on my promise to her. We gathered with this group and to my delight, I was again handed a baby (from one of the girls who hoped on our bus the day before!), all of the dancers were spread out amongst the people when singing started and dancing began once again! We trekked up the side of a hill with the members that followed, some were small children with full water jugs on their heads. These small men of the ripe age of 4 or 5 not only worked as hard as any adult I have ever met but they do it with the same stoic nature. One little boy was so determined to hold my had that he let water drops drip into his eyes as we walked up this steep hill. I stopped to wipe his eyes for him and was met with a look that resembled confusion as to why I would do this for him but then a small smile appeared and I knew he understood it to be a loving gesture towards him.

I am not a naive person and I am not here with any delusion that I can “save” anyone but what I do know for sure is that the exchanges of Love between these people, myself and the entire World Dance group is making changes in the lives of everyone involved. Some people are not supportive of my being here and feel I am being selfish but what I know is that I trust my heart and this is exactly where I am meant to be right now. I know that love is a powerful tool and it works in ways that we may not be conscious of – yet! Human connection is a necessary and vital part of making the world a better place and it has made the support of World Dance even more real to the Never Again Fellowship and they deserve that and they are worth the trip.

Oh yeah, I lost my camera today while dancing so no photos to share of Nataraja 😦 Oh well, I was just saying I would really like a better one anyway! Om Shiva