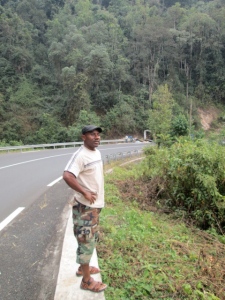 In keeping with living in the present moment I will go against my urge to post things I have been processing for a few days now and just write about today, which was an amazing day! I have joined Justin on his trip to Cyangugu to purchase and deliver the promised mattresses to the Pygmy tribe that World Dance supports and that we visited together on our trip earlier in June. As a side note to that, Justin says to me “oh and I have been invited to a wedding on Saturday so you need a dress!” Well, it is never as simple as Justin makes it out to be and this wedding ended up starting at 6 am this morning and he is still going strong, I decided to call it a day after 14 hours of wedding! 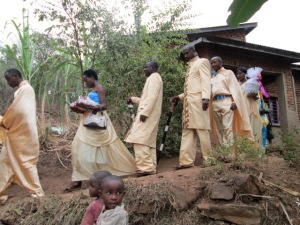 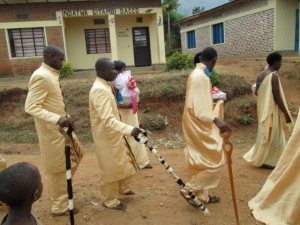 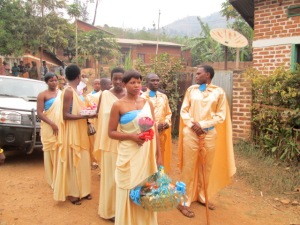 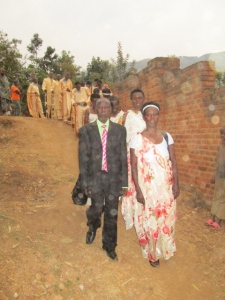 It started with picking up the Groom and his men to take them 2 hours away to the home of the bride’s parents to present the Dowry. This was such an amazing event to witness, the whole thing kind of ancient and tribal but very much western in the clothing and drinking of Fanta! They love Fanta here! It was like watching a play. They acted out the scenes and played the roles, pretending to question the groom’s spokesman about why he was there and why he had gifts for the family. They brought out a few different woman for him to choose from when he said he was there for a wedding, this brought on a few chuckels from the crowd as the first girl was about 7 years old! 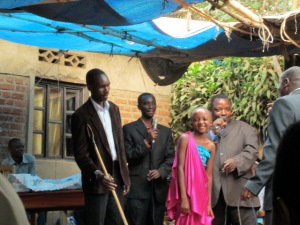 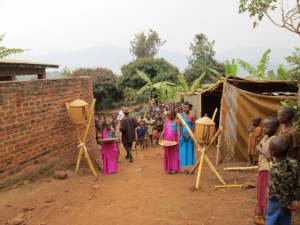 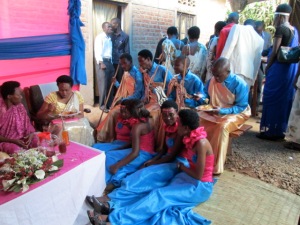 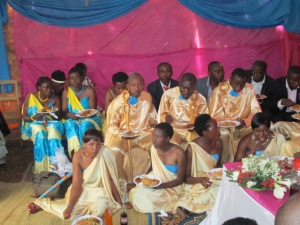 Then the brothers or protectors of the Bride came out with spears to guard her from the men that wanted to try and trick them into letting her go to the wrong man. When the groom approached and gave the right response to their inquisitions he was welcomed and they were engaged to be married, a ring was placed on her middle finger. It was so wonderful to witness tradition like this actually taking place, and being respected and honored. 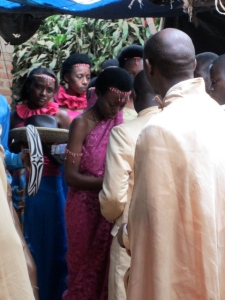 Let me back up for this next part, it started last night with a meeting to discuss details. Justin said he was just a guest, then by the time we left he was the best man and a guest of honor to a man whom he doesn’t really know all that well! Turns out Justin is a person who people want others to know that they know. He has a great reputation of being a man of his word and capable of great things, this I see to be very true. So after the meeting, we are presented, as usual when you visit someone’s home, with a meal! This meal looked familiar at first and then I took a second look because it appeared as though someone had left their ear in the stew! Turns out I was almost right! I asked Justing what it was and he said with a totally straight face – “Oh, it’s intestines, heart, stomach….” WHAT!!  Man was I glad I had practice with the Sheep Brains earlier in the week! 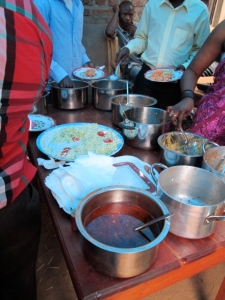 I took a few potatoes and tried one small piece of ear..errr I mean intestine. It wasn’t bad, just gross. It smelled like cow, like fresh cow. It was grainy and very rubbery! I politely turned down a second helping and thought to myself, ok that’s done, I tried it and I didn’t like it!  Then today after the dowry ceremony I pointed to a stew like substance and asked Justin what it was and he said “oh, its banana’s.” I think he’s bananas sometimes because it was full of intestines too!! I am not sure if my own intestines were meant to digest this much intestine! It was sneaky this time, cut into small pieces – I am on the look out now for anything resembling an organ. I have been there, done that – check!  All the local village children hanging through the tent walls asking for food was difficult to manage as I ate right in front of them with 100 other people. They ran in and grabbed any scrap left on a plate, any bit of liquid available like animals hunched over, guarding their meal. That is the reality of this place and it makes it a challenge at times to feel worthy of all that I am given not only here but in life. Here I am turning up my nose at food and these children are ravaging other peoples left over intestines – good reminder of Gratitude! 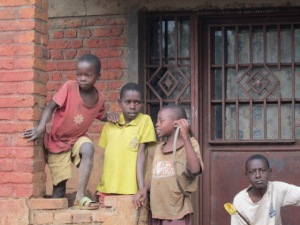 After the Dowry was given, which was a cow and a few offerings of Fanta, it was time for the Bride and Groom to head to the church. Turns out Justin had more roles to play and his car was decorated, he was dressed up and was the chauffeur for the newly engaged couple. He was clearly not happy about what was being asked of him today and yet because of strong cultural influences he gave himself completely over to what was being asked. I often thought I was missing out on something by not being from a strong cultural background with traditions, etc but I am seeing more and more how it seems to keep people from doing what they feel is right or what they need to do for themselves. An example is that when you go to someone’s home you take a beverage of some kind and it is not ok to say “No Thank you!” It usually means someone leans over and tells me to just take a Fanta, which is exactly what I don’t want to put into my body. It helps me be strong in sticking to what I need for myself to feel well and I do say “No thank you” or ask for water. I am willing to bend but not if it makes me sacrifice my health. So maybe part of my Karma is that I have no strong cultural background to work against in terms of speaking up for what is right for me, I am lucky to have the freedom to choose in my life, even if its as simple as saying “No thank you” to a bottle of soda pop. At the same time I appreciate very much the culture and see the importance of it being carried on. 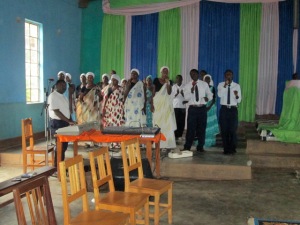 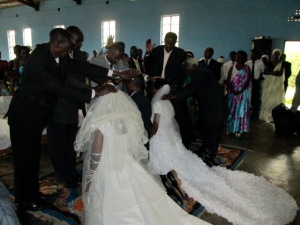 The Church was rockin’ as we went in with singing and dancing and to my surprise there was another bride and groom, yup, two couples getting married at the same time!  It was a joyful time full of song, preaching and lots of noises from the crowd. In this area, when one wants to express happiness they make a “zagareet” sound with their mouths. Its like a really fast “lalalalalalalalal” or a light, high pitched “eeeeeeeeee” can be used as well. It took us off guard when the Pygmy’s did it during out visit with World Dance but I see now it is very common here and I enjoy participating in this tradition! 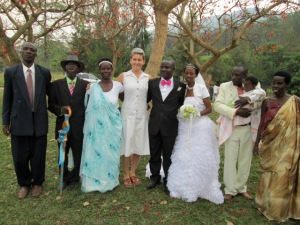 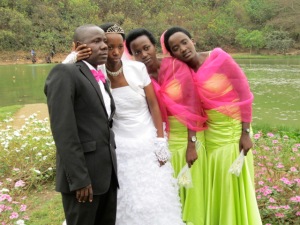 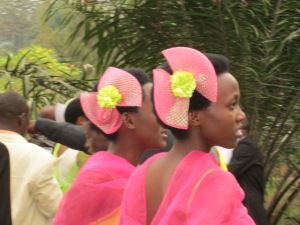 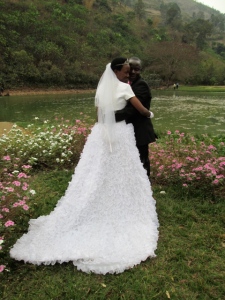 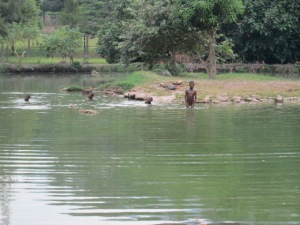 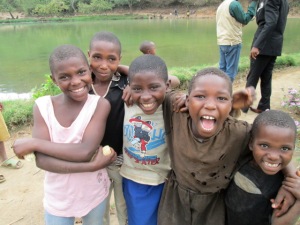 Next, photos at the Hot Springs!  World Dancers will remember this place, it is beautiful – but don’t go in the water! I was invited into the wedding photos with big smiles and warm hugs by everyone. Then the tables turned, I have been used to taking peoples photos and think nothing of it really, but when I became the centre of attention for the guests to have their photos taken with it felt ….well actually it felt ok. I feel like a celebrity a lot of the time here the way people look at me, smile at me, touch me, talk to me and want to marry me so this was just another way that I could surrender to the reality that I am a highly sought after photo op where ever I go! I get to just surrender to the fact that I am different and exciting for people to see. It really is a great practice for my ego to just smile and then walk away without any attachment to the photo and to the great desire people have to be seen with me. The rest of the time I was taking photos and playing with some children. I plan to give all my photos to the new couple as a gift for their generosity and warm welcome into their special day. 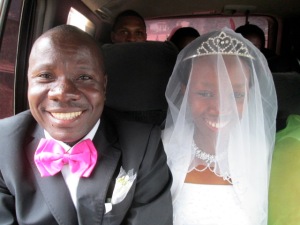 (Theo and his new Wife!)

So off we go again for another 2 hour drive back to the hotel where the reception will be held, this time I get to drive! Now for those of you who have been here you know that driving here can be equated to a bowl of spaghetti, it is all over the place yet somehow manages to flow smoothly. I felt very confident and because I was carrying the precious cargo of the Bride and Groom it was an honor to be the one behind the wheel. Part of me knew it was sort of planned that the wedding party be driven by the Muzungo, which I was fine with. We arrived for the reception and I was again escorted in and given priority seating and a head start on the meal line up. This part was very similar to a western wedding complete with cake cutting, feeding each other, head tables, etc. Everyone drank Fanta after Fanta, ate foodand then it was time to go. The couple was given gifts before they left the building and were danced outside by my friend Celine and her best friend which led to more dancing in the parking lot with all of the children that again made their way into the building for scraps of leftovers. 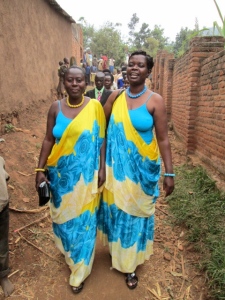 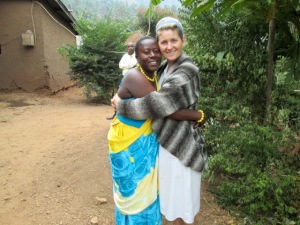 I was thankful that Justin at this point knew I would prefer to go back to the hotel and he dropped me off with an uncertainty of his estimated time of return. He went from being just a guest at wedding to being almost as important that day as the Groom – very interesting to watch it unfold and so he had duties to uphold tonight! I am sure I will hear about it tomorrow! 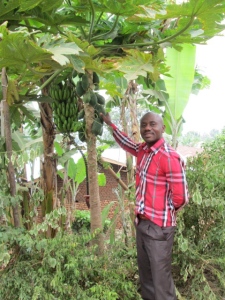